After a drop in oil production from August to September of 2016, oil production made its way back up. According to the EIA (Environmental Impact Assessment), oil production will stay at a steady pace with small increases and decreases majority of the year. However, towards the end of 2017 (September- December), oil production is projected to have a drastic increase.

With the increase of oil production towards the end of 2017, the oil industry will prepare for improvements in production. In order to maintain an improve oil production, it is important to ensure that pipelines are in good shape. High quality industrial piping materials are used throughout the year to make repairs and improvements to oil piping systems in the United States. For areas like North Dakota, upgrading their oil piping systems in winter can be a challenge. 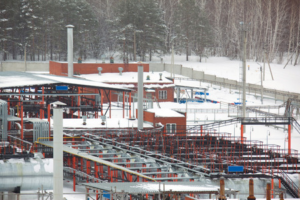 Regardless of your needs, Detroit Nipple Works is ready to supply you with the highest quality piping materials in the US. The pipe and fittings needed for the oil industry are readily available from Detroit Nipple Works. We ship to states that are heavy in oil production such as North Dakota, Texas, New Mexico and California.

Need to get piping supplies fast? Contact Us Now!

Texas led the Untied states in Oil Production in 2016, producing over 10.5 billion barrels of oil. The runner-up for US oil production was North Dakota with 5.7 billion barrels.