ERW piping or Electric Resistance Welded pipe are used for many different applications, as it is the most readily available and economical type of mechanical tubing. There are two different types or processes to create ERW tubing. You have, CREW or Cold Rolled ERW and you have HREW or Hot Rolled ERW. With each type of Electric Resistance Welded pipe, there are different steps that go into creating the tubing, as well as different uses for each ERW tubing after it is created.

ERW pipe initially starts out as a flat pieces of steel, and then rolled into a tube shape. Without overlapping, the seam is then welded using a process called “Electric Resistance”. You may now understand where ERW tubing gets its name! During the process of creating ERW tubing, the piping may either be hot rolled or cold rolled, which has a drastic change on the outcome of electric resistance piping. Also created from the electric resistance welding process is DOM tubing.

CREW or Cold Rolled ERW follows the same process as hot rolled ERW, except it is done at room temperature. As a result, CREW piping has a stronger yield strength than HREW. Creating these pipes at room temperature makes the lattice structure withing the steel tighter, along with a smother surface. Because of the strength and smoothness of CREW piping, it is much better to work with that HREW, as it has a greater tolerance. 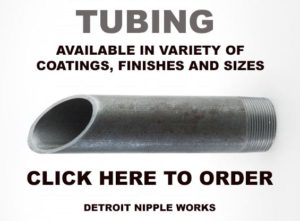