Difference Between ANPT and NPT Threads

First of all, let’s discuss the similarities between the two types of threading. Outside the fact they are threaded pipes, they are both regulated by the ASA (American Standards Standards). In addition, they are primarily used to transfer gas and liquid. However, there are distinct differences that need to be shown.

Let’s start off with NPT threads. NPT stands for National Pipe Threaded. These fittings are standard threading that is used in the United States. NPT consists of tapered threading which has ‘imperfect threads’ at the end of the threading. By connecting the male and female parts, the ‘imperfect thread’ makes a seal. Though torquing the threads, they compress against each other making an effective seal. Without this seal, leaks of vapor and liquid could occur. This could be dangerous if the content is hazardous. That is why NPT is prominently used in these situations, as it can make a flawless piping system. However, NPT threads are not recommended for disassembling and then resemble. That is because it weakens the sealing abilities of the pipes.

This is one of the most common types of threading seen in pipes.

ANPT threads are both similar and different from its counterpart. Internally, ANPT is the same as NPT. However, the applications and other factors are what make these pipes so distinctive.  ANPT is an acronym for Aeronautical National Pipe Taper. These pipes have been used prominently by the Navy and Army. In order to use these pipes in aeronautical sphere, the pipe threading is carefully controlled in regards to diameter, taper, and thread form. This strict regulation on these threads allows them to be carefully crafted to have an effective seal that handles the stress of aeronautical uses.

As you can see, NPT and ANPT have differences that make them useful in different industries. For more information, contact Detroit Nipple Works! 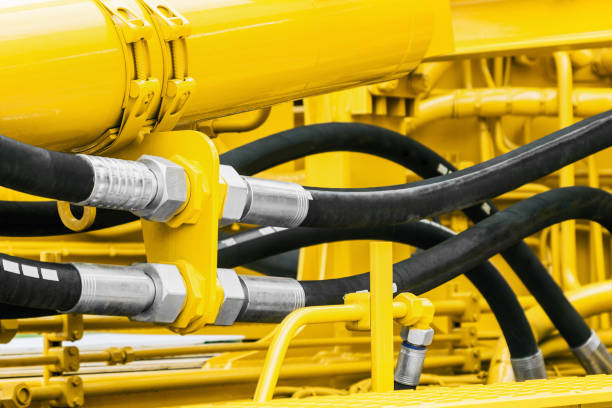 Hydraulic pipe provides transportation for fluid from one component to another. The three main liquids that will pass through a hydraulic pipe include petroleum oil, synthetic oil, and liquid with a high water content. Also, it is a very important part of the hydraulic system. The hose has to be able to tightly bend around all corners. Hose pipe flexibility enables components to be positioned inside the most efficient places, including tight places and across long distances.

Hydraulic piping has many uses, the most general being to transfer liquids. In addition, the pipes can be used to transfer energy-generating liquid to different systems to function as a full hydraulic system. For these instances, the pipes and tubes have to be rigid and immobile so the system can be easily controlled. Also, in contrast, construction machinery usually has flexible and open hydraulic tubing so as to allow flexibility and free range of motion.

The type of hydraulic tube depends on its use and the pressures or chemicals it may be subjected to.

Knowing the correct threading of the hydraulic hose is important for repair. Selecting the wrong part can result in damage to the thread during installation. In addition, this negatively affects the pressure holding capacity and seal reliability of the hydraulic fitting. Also, there are six types of threads commonly used on hydraulic tube fittings: