Detroit Nipple Works origins date back to 1897 as described on our history page. Since we are a part of the steel industry (producing steel nipples), selling steel pipe and fittings among other metal products, we thought it would be interesting to look into the modern steel industry history. 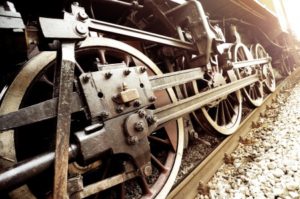 When you think of steel you think of Pennsylvania and for sure it has a prominent place in the history of American steel mills and production. However, when searching you find some very interesting and quite varied accounts of circumstances surrounding the history of modern steel production. The first interesting thing we find When first searching for “where were the first steel mills built” is that it brings up the results: “America’s First Bessemer Steel Mill.” Here is a historical reference to Eureka Iron Works in Wyandotte Michigan. It was owned by the industrialist pioneer Eber B. Ward. Prior to steel, they smelted iron ore that was mined in the Upper Peninsula into iron. In 1864 they made their first steel ingots by using the Bessemer Steel Process and the following year steel rails for railroads were produced at Ward’s Chicago mill.

Now here is where it gets a little more interesting. The Bessemer process made it so the removing of impurities from steel could be done inexpensively by oxidation from passing air through the molten iron. Because of this, steel could be mass-produced, which pretty much changed everything. Henry Bessemer an Englishman is the namesake of this process. There appear to be two camps on this though. Wikipedia’s page on the Bessemer process is all about Bessemer and only mentions William Kelly as an unsubstantiated contributor. In other references, including the Eureka Iron Works marker, state that the method was actually developed by William Kelly, an American. From there it was said to be quickly adopted by other steel companies. 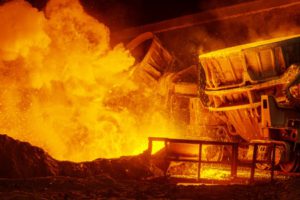 Subsequently, Kelly’s patent was extended whereas Bessemer’s was not. Still here it gets murky because it seems like there were three parts to the patent pie. Bessemer, Kelly and a process discovered by Robert Mushet. Without trying to restate any of this as fact, we can simply observe that Ward was among a group of industrialists that built and made their fortunes after this process was discovered and implemented. Among them were such notables as Alexander L. Holley, Daniel J. Morrell, John A. Griswold, and Andrew Carnegie. At that time, Troy New York and Detroit Michigan had hopes of becoming what Pittsburgh Pennsylvania did as the steel capital of the world. About that; according to an article on the steel mill, the first American Steel plant was built by the Pennsylvania Steel Company in 1866 about three miles south of Harrison PA.

Much of the principle is the same today but the processes have changed giving way to better and more efficient ways to produce steel variations and alloys. Processes like pickling steel or the use of stainless steel are now a part of the steel industry history over 150 years later. For us, knowing that our business history started a mere 40 years after the Bessemer converter was developed and in the same era that the steel baron’s fortunes were first made is pretty cool.